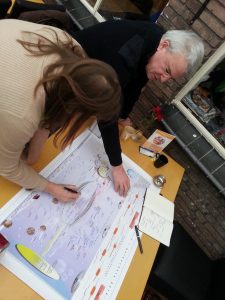 Esther van der Valk and Harry te Riele are independent consultants working under the Dutch label Transitiefocus. Since 2014 they’ve been working with individuals, communities, municipalities, provinces, and national government on friction during deep societal change. Geographically their laboratry lies in the Netherlands, where the Agro/food transition leads to stress and tensions.

Esther acts as a coach, working with teams, organizations, and communities on communication and on personal development of individuals. Harry is an engineer by education and has specialized in patterns of societal deep change. He assists by explaining why things go the way they go. Together they assist teams who feel responsible for transitioning society in a decent way.

Personally, Harry and Esther differ greatly in their character and their working. Harry is an explorer and willing to change the system, while Esther is more of an optimizing person, building on the current system. Their constant mutual dialogues are a reflection of discussion patterns in society-at-large. 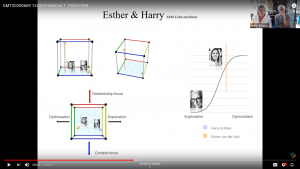 If two distinctively diverse characters like TF manage to handle a topic, society-at-large will too. Still from webinar, 9 June 2020

Together they show that under times of deep change everybody is actively involved and needed.  Some for diminishing, tapering, and decomposing familiar system routines. Others for experimenting, developing, and scaling up the new. And next to that people who are keeping track of the overall change course and pace, telling society the over-all narrative, and collecting feed-back signals from each part of the curve. So going solely for the innovators and dismiss the critical voices from the current systeem is no a wise move. 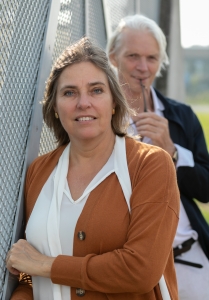 Esther and Harry claim that society as a whole therefor needs cognitively complete teams and networks in order to transition a system smoothly. They call this the HR of societal transitions and use the AEM-Cube assessment (check human-insight.com) for that.

In cognitively diverse  networks, communication troubles are obvious. Esther and Harry developed a language in which AEM plays a key role. They teach others to de-accuse or neutralize their language, to understand positions, transition phases, the roles and added value of AEM-diverse teams. Transitiefocus is seated in the city of Rotterdam, the Netherlands. 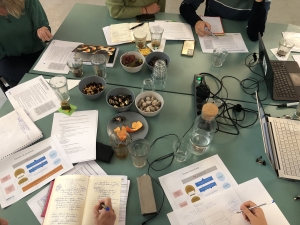